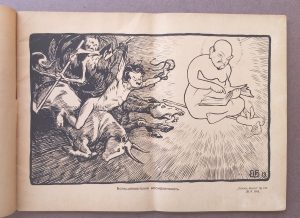 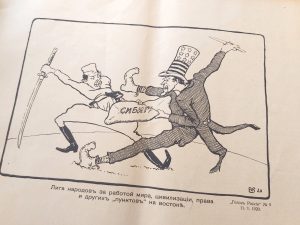 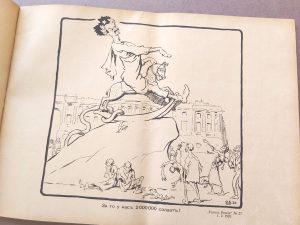 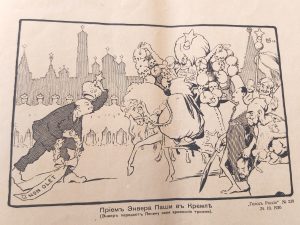 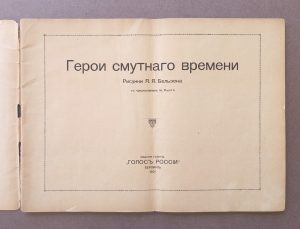 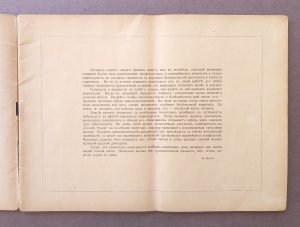 Large caricatures of a troubled year

BELZEN, Ia. Ia. (artist), Geroi Smutnogo Vremeni,Golos Rossiii, Berlin , 1921.
Very rare album of full-page satirical illustrations of the situation in Russia during the turbulent years of the Civil War. Published in Berlin in 1921, and particularly remarkbale for its even-handed swipe at all participants in the War. Only three copies traced in Western public institutions. Read More

Very rare full-page satirical illustrations of the situation in Russia during the turbulent years of the Civil War. We could trace only three examples in WorldCat: Harvard (apparently the only one in the USA), Leipzig and Nanterre (France); the NYPL seems to own a microform. We are not aware of any other copy on the market in recent years.

Rather unusually, Belzen’s sharply observed satires take an even-handed swipe at all participants in the War, from Bolsheviks and White leaders, to Western politicians. He includes a roll-call of famous personalities from the period, including Lenin, Trotsky, Wrangel, Lloyd George, Wilson, and so on. The overall effect is to condemn all forms of excess, and to excoriate all those seeking to exploit Russia as it goes from rack to ruin.

Here published as an album titled after Lermontov’s masterpiece A Hero of Our Time, these drawings first appeared in the émigré newspaper Golos Rossii [The Voice of Russia] during a year, from September 1919 to October 1920: indeed each page gives the exact publication reference of the caricature. With an introduction by N. Rysto.

From St. Petersburg and of Latvian origin, Belzen (1870-1937; also Jekabs Belzens) was an artist and illustrator much active at the turn of the century. He created in particular almost 100 drawings for an edition of Pushkin’s Evgenii Onegin, designed book covers and illustrated periodicals. He took part in various art exhibitions, before leaving to Germany in 1919 where he continued his activity with ex-libris designs, book and periodical illustrations, and various caricatures, including against Hitler. He finally emigrated to New York in 1936, where he worked a bit the last year of his life.

The “first Russian daily abroad” (as advertised in the album), Golos Rossii was published in Berlin between 1919 and 1922, when the German capital was host to a buoyant Russian émigré life and was initially described on its masthead as an ‘organ of Russian democratic thought’.

Large landscape 4to (22.9 x 31.4 cm). Title, introduction leaf and [30] leaves, printed on rectos only with full-page illustrations, captions in Russian.

Stapled with one staple in original publisher’s printed wrappers, ad for Golos Rossii printed to inside lower wrapper.