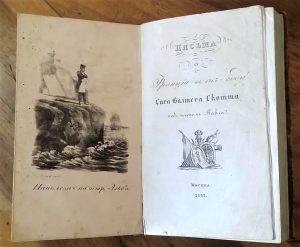 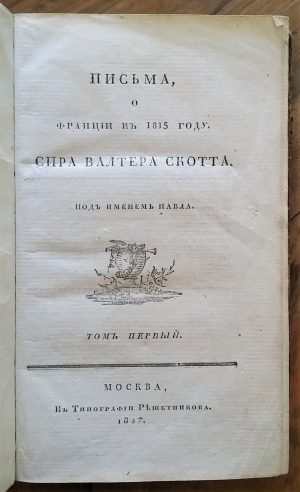 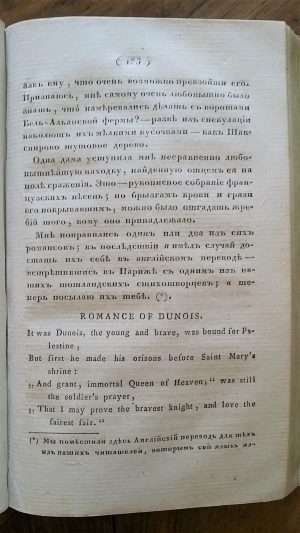 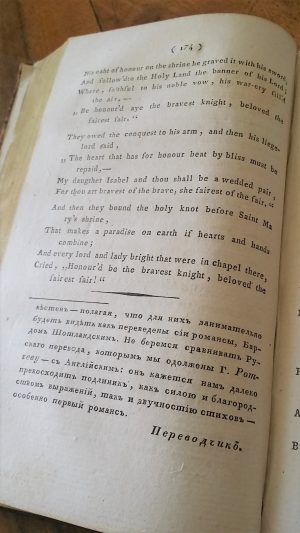 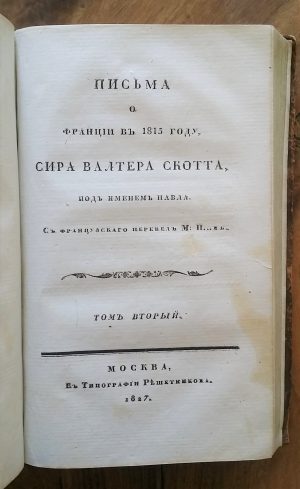 [Letters about France in 1815 by Sir Walter Scott under the name Pavel].

The first edition of Scott’s Paul’s Letters to His Kinsfolk in Russian, witnessing the significance of Walter Scott in Russia as well as the popularity of Napoleon with the Russian audience.

Very rare: no copy traced in the Americas or the UK. WorldCat shows only one example (in Rome), and we could trace four other ones: one in Prague and three in Russia (RGB, RNB and Kemerovo University).

Scott travelled to Waterloo in summer 1815 within months after the battle, consequently publishing ‘Paul’s Letters’ in 1816, anonymously, as an account of an invented person. The work bears many features of Scott’s novels, including an invented story of its creation, a mixture of historic facts with fiction and the broad temporal and geographical scope of the narrative.

Nevertheless, when translated into Russian the documentary nature of the text was emphasised and the focus was made on the personality of Walter Scott.

By mid-1820s the authorship of ‘Paul’s Letters’ was well known and Russian booksellers advertised it as a new and original book by an extremely popular author. Scott was hardly known to Russian readers as a poet, but early translations of his novels into French made him tremendously popular and defined the emergence of the very genre of historic novel in Russian literature. Since 1823 Scott’s works were translated into Russian incredibly persistently, with three or four books published annually. It is sufficient to mention that in the same 1827 Russian emperor Nicholas I criticised Alexander Pushkin’s play Boris Godunov for not being a novel in the style of Walter Scott.

The primary aims of the letters were to describe a first-hand experience of visiting the territories that until very recently were inaccessible to British travellers, as well as to provide an account of recent historical events. It was the first travel of Scott abroad, and his impressions of those lands that he was passing were as exotic to him, as they were to Russian readers. The importance of Napoleonic wars for Russia, the great patriotic rise caused by Napoleon’s Russian campaign and public fascination of the Russian audience with the defeated French Emperor heated up the interest towards the book. It is telling that the publisher chose as frontispiece a lithograph of Napoleon on Elba.

As usual, the Russian version was translated from the French. The translator is not named, although his initials are indicated on the title page of the second volume: M. P-v., possibly a M. Panov. He included his scarce comments in footnotes, and kept Scott’s English translations of French soldiers’ songs, next to the original French verses and their Russian translations by Mr. Rotchev.