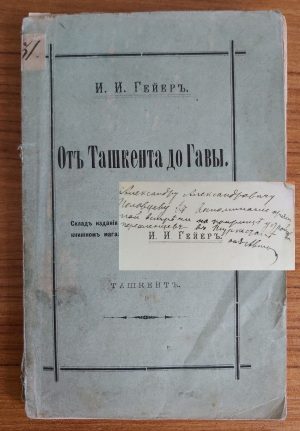 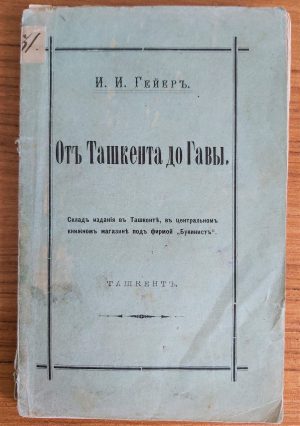 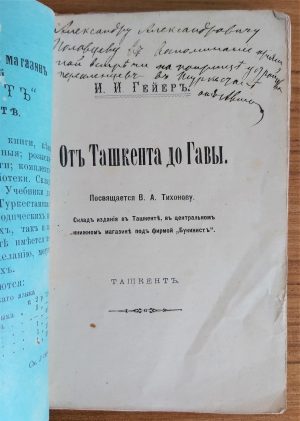 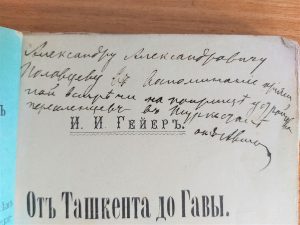 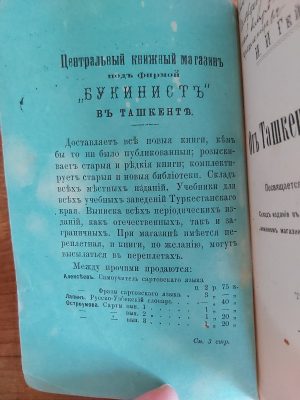 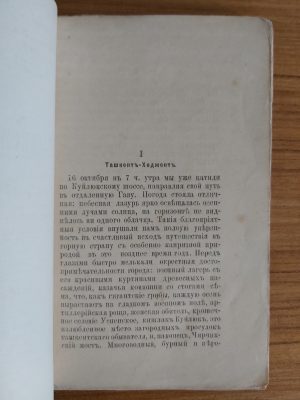 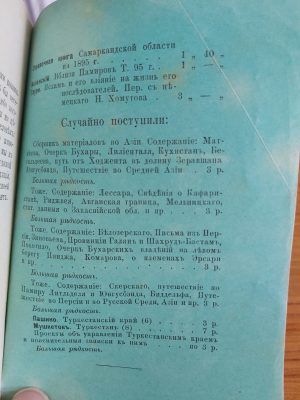 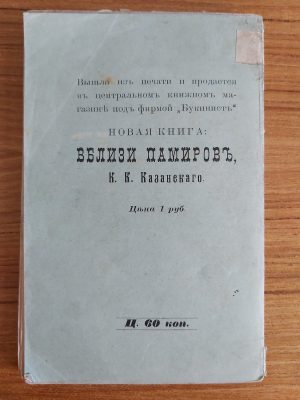 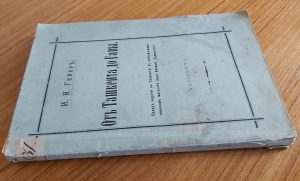 [From Tashkent to Gava]

GEIER, Ivan Ivanovich, Ot Tashkenta do Gavy,Tip. bratiev Portsevykh, Tashkent , [1895].
A lovely association copy, inscribed by the author to an important Russain official in Turkestan, of a very rare travel account in the heart of Russian Central Asia. An early Uzbek publication containing fascinating details on the economy of the region, especially in the Fergana valley in the Arslanbob mountains, famous for its important walnut forest. Read More

A lovely association copy, inscribed by the author, of a very rare travel account in the heart of Russian Central Asia. We are not aware of another copy, whether on the market or in libraries (not in WorldCat).

Educated in St Petersburg, the young Geier (1860-1908) was arrested for participating in the anti-government circle Narodnaia Volia and exiled to Tashkent, then the centre of the Syr-Darya Oblast of the Russian Empire. Geier there worked as a secretary of the Statistical Committee and progressively became an authority on Turkestan’s history and ethnography, particularly on Kazakh culture.

“Ot Tashkenta do Gavy” was Geier’s first detailed publication on the region. Written in the form of a travel journal, it describes the route from Tashkent via Khujand (modern Tajikistan), Kokand and Andijan (modern Uzbekistan) to the Arslanbob valley and kishlak (settlement) Gava in Kyrgyzstan. Geier’s interesting observations cover in particular some industrial aspects of the Fergana valley, the exploitation of a large wild walnut forest in Arslanbob and the extraction of the prized walnut tree burls, which was exported to Marseille; Geier takes the opportunity to develop thoughts to make this activity more profitable for the Russian government.

The Arslanbob mountain range was famous for this forest; in fact, Kyrgyzstan’s first known export to Europe was the Arslanbob walnut, and it is from the Arslanbob valley that Alexander the Great brought walnut to Greece; from there the plant spread across Europe. Interestingly in Russian, walnut is called the “Greek nut”.

An early Uzbek publication. Produced in Tashkent in 1895, this pamphlet belongs to the early stage of book printing on the territory of nowadays Uzbekistan, where the first book appeared in 1871 (at a press which belonged to the Russian military base). The brothers Portsev were important publishers, in charge in particular of producing the main newspaper of the region, “Turkestanskie Vedomosti” [News of Turkenstan], of which Geier’s pamphlet is an off-print.

Polovtsev was of Imperial blood through the marriage of his father, the Secretary of State Alexander Polovtsev, with Nadezhda Iiuneva, an illegitimate daughter of Grand Duke Mikhail Pavlovich Romanov; he was therefore a grand-nephew of Tsars Alexander I and Nicholas I. In 1896, shortly after the publication of Geier’s book, Polovtsev was sent to Tashkent by the Interior Ministry to supervise resettlement in Central Asia and the Caucasus. In 1899, his team began archaeological excavations in Samarkand. Polovtsev was appointed in 1906 consul general in Bombay, and emigrated to Paris in 1918.

A. Polovtsev (large inscription to title); inventory label to head of spine with number written in ink.