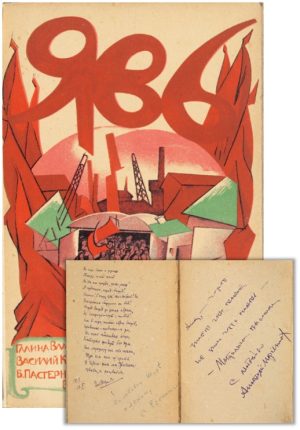 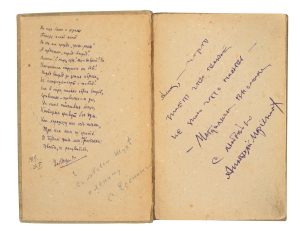 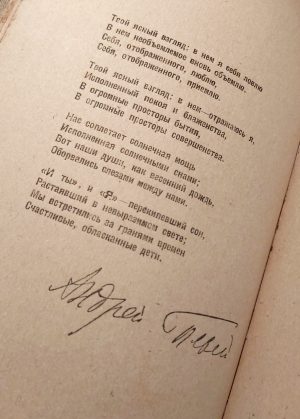 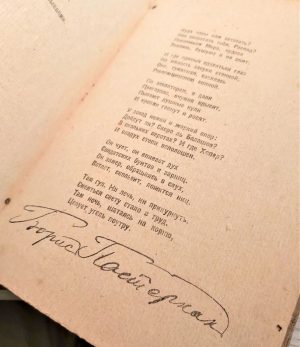 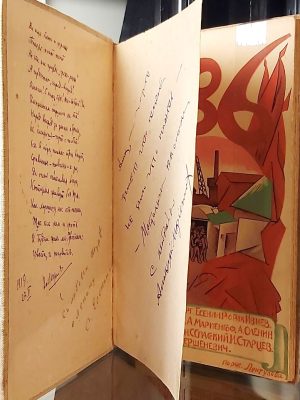 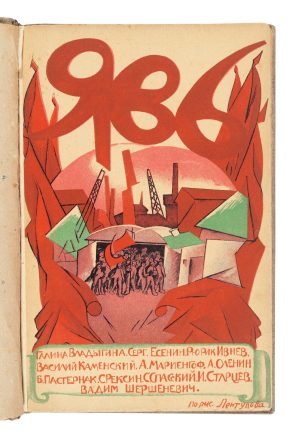 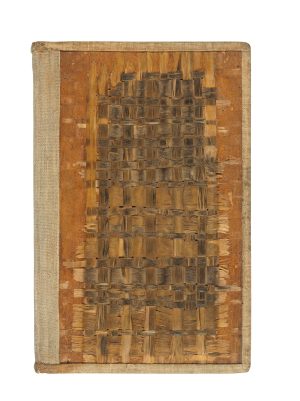 ESENIN, Sergei, with Boris PASTERNAK, Andrei BELII et al, Iav. Stikhi,[Iav, Moskva,] , 1919.
Exceptional association copy of these scandalous Russian imaginist poems, extensively inscribed by three co-authors – including Esenin – to a fourth one, Alexander Olenin. With Aristarkh Lentulov’s striking cover bound in a very unusual cloth-and-wicker binding of the time. One of the best, if not the best example of this famous book of Russian poetry. Read More

Exceptional association copy of this scandalous book of imaginist poems, extensively inscribed by three co-authors – including Esenin – to a fourth one, Alexander Olenin (1865-1944).

The collection was edited by Esenin’s close friend, Anatolii Mariengof, who in 1919 was a controversial rising star of Russian poetry. Indeed in February 1919 Mariengof published his sacrilegious poem ‘Magdalene’, for which Lenin called him ‘a sick boy’ of Russian literature (Lenin V.I. Biograficheskaia khronika. V.7, p.13; V.9, p.425). Mariengof decided to open Iav with his poems, the first one being a panegyric to mass terror.

Iav (sometimes spelt Yav’) was the first collection published by imaginists, and it paved the way to the loud, albeit scandalous glory of this association of poets, who defied social norms of behaviour (for example, they painted the walls of a monastery with lines from their own atheistic verses). The collection also features poets who never directly joined the imaginists, i.e. Pasternak and Bely. In addition, it includes poems by Vladychina, Ivnev, Kamenskii, Olenin, Oreshin, Reksin, Spasskii, Startsev, and Shershenevich.

The publication of this book of poems at the time of extreme paper shortages in Moscow became possible due to numerous connections of imaginists. Ivnev, one of the authors, was the secretary of Lunacharskii, the People’s Commissar of Education. In addition, among close acquaintances of Mariengof and Esenin was a prominent revolutionary Blumkin, as well as Kamenei and Trotsky. The very fact of the publication of the poetry collection caused a great scandal. Eremeev, head of the All-Russian Central Executive Committee Publishing House, was reprimanded for allowing the publication in the face of a critical lack of paper for textbooks and propaganda materials.

The collection is devoted entirely to the Bolshevik revolution. The poems feature sacrilege, themes of violence, and revolutionary vengeance. Imaginists sought to repeat the scandalous success that once accompanied the emergence of Russian cubofuturism. Their insolence was frankly theatrical in nature. The environment of young poets is presented as a permanent bohemian orgy. In reality, the activities of the group largely proved their serious intentions even during the hungry years of the early Communism. The Association of Freethinkers, uniting four of the authors of Iav (Shershenevich, Esenin, Mariengof and Ivnev), had an outstanding commercial success: they ran a printing house, a publishing house, a bookstore, a cinema, and a periodical.

Despite the pro-revolutionary premise of the book, most reviewers (most notably, Lvov-Rogachevskii) were outraged by the bloody images with which the authors associated the revolution. “The Mariengofs, whipping holiness with whips, pulling up the “frail body of Christ”, who suffered for the idea, do not dare to invoke the name of a person in vain. Their “I” has nothing to do with the great revolution, which strides through outdated values, but does not dance the disgusting cancan” (Lvov-Rogachevskii, Poeziia novoi Rossii: poety polei i gorodskikh okrain, M., 1919).

With Lentulov’s striking cover bound in a very unusual cloth-and-wicker binding, strictly contemporary since the inscriptions are written on the endpapers, before the upper wrapper. This bright red cover was designed by Aristarkh Lentulov (1882-1943), a celebrated painter and one of the founders of the Russian avant-garde: the cover is a great example of his signature “explosion of colours”.