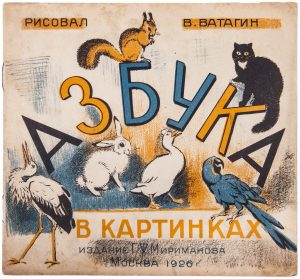 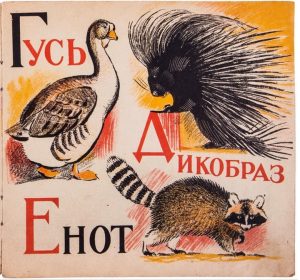 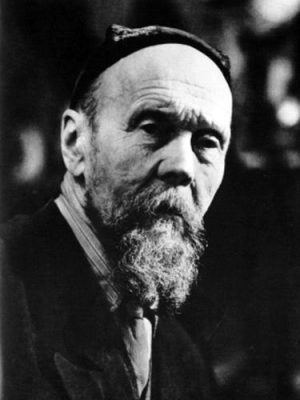 Very rare ABC by an artist of the Moscow Darwin Museum

VATAGIN, Vasilii Alekseevich, Azbuka v kartinkakh,G.F. Mirimanov, Moskva , 1926.
Charming early Soviet ABC by a noted artist of natural history, in excellent condition and very rare: we could trace only one copy at auction (in Russia) and one in a public library (in Russia too). Read More

Charming early Soviet ABC, in excellent condition and very rare: we could find a copy in the Russian State Library (Moscow) but in no other library. Not traced in WorldCat. Very rare also on the market, as we could trace only one example only at auction, a few years ago in Russia.

Born in Moscow, Vatagin (1883/1884-1969) developed an artistic taste for animals, studying in parallel art and natural sciences. He travelled widely in Russia, Europe, and Asia at the beginning of the century, gathering an experienced knowledge of exotic animals.

Vatagin searched for a way of reconciling the two sides of animal drawing: the scientific and the artistic, and as a result, his individual style of animal illustration emerged. His work as a young artist was praised by a famous Russian botanist and major proponent of Darwin’s theory, Professor Kliment Timiriazev: “The main success of the artist depends, of course, on the mobility of his figures: they all live, run, sneak, flutter, and next to this […] the most thorough details of their endless variety of apparels are [observed]” (quoted in Young Naturalist, 1984, №1, p. 29).

Vatagin remained a staff member of the Darwin museum in Moscow during a number of years, and contributed to many artistic and urban projects, such as the design of the old entrance to the Moscow Zoo (1931-32; replaced in the 1980s). His talent and artistic contribution was recognized by the Soviet Union: he became a member of the Academy of Arts of the USSR in 1957 and was awarded the prestigious title of “People’s Artist of the Russian Soviet Republic” in 1964.

In the 1920s, Vatagin developed an activity as book artist, illustrating in particular works by Kipling, Jack London and Tolstoy. His Azbuka was conceived during this fertile period, integrating his taste and talent for animal depictions within the rich genre of Russian illustrated ABCs, which had been developing since the early 20th century. With his bright colours and bold illustrations, Vatagin’s ABC proudly joins a celebrated group, including works designed by Benois, Dobuzhinsky, Böhm, Chekhonin, Mayakovsky, Lebedev etc.