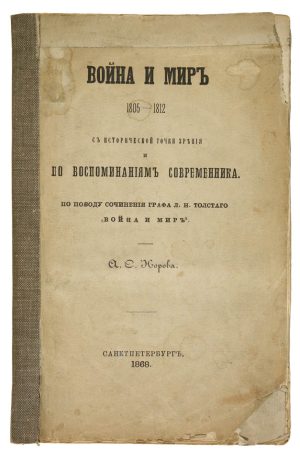 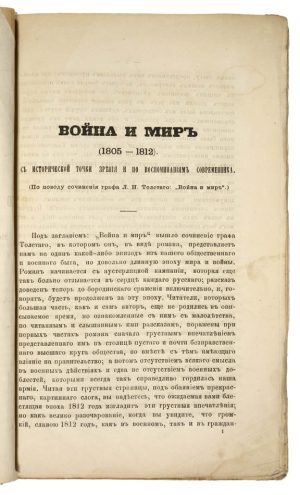 [War and Peace (1805-1812). From an Historical Perspective and Following Memories of a Contemporary. About the work of Count L.N. Tolstoy, "War and Peace"]

A highly critical review of one of the best and most famous Russian novels. A scarce pamphlet, written by a 1812 Russian soldier, here in its first separate edition, published before the full appearance of Tolstoy’s saga, which was being brought by Ris in Moscow, in 1868 through to 1869, the year Norov (1795-1869) died.

Avraam Norov (1795—1869) was a statesman, travel writer and noted book collector: he was Minister of Education in 1853-58 and he published a catalogue of his library this same year 1868; his 15,000-volume strong collection (incl. about 150 incunabula) is now in the Russian State Library in Moscow. He had just started his military career when Napoleon invaded Russia. As a cadet, Norov took part in a number of battles, and he lost a leg at Borodino.

Naturally, Norov felt very strongly about Tolstoy’s saga, which was being published. Having read the first three parts that appeared in print by 1868, he thought that Tolstoy’s work lacked patriotism, respect towards the defenders of the Motherland and historical objectivity. Norov’s extensive commentary was published, probably simultaneously, in the issue 11 of the military periodical “Voennyi sbornik” (in November 1868, p. 189] and in this offprint.

Among other comments, Norov accuses Tolstoy of simply gathering “only all scandalous anecdotes” – and recognises Tolstoy’s talent in rendering them: “It is not difficult to prove by the historical writings of our venerable military writers that this novel contains just about every scandalous wartime anecdote of the era. These anecdotes would have remained completely obscure if the author, with the same talent that he used to conceive them, had collected and depicted heroic episodes of our wars instead, even the unfortunate ones, of which our posterity will always be proud.” (our translation).

Norov’s criticism was overall consistent with the reaction of the conservative members of the Russian nobility. They were accusing Tolstoy of distorting events of the Patriotic War, and ridiculising patriotic feelings of their fathers. Thus, both the poet Prince Petr Viazemskiy and the son of Fedor Rastopchin, the governor of Moscow in 1812, took a stand against Tolstoy’s supposedely inacurate depiction of the way of life and the role of nobility during the war.

While Tolstoy did not directly respond to the criticism, he emphasised on multiple occasions that his aim was to write the history of the people (“pisat istoriiu naroda”) rather than of individual characters, and to show how the nation came together to protect its Motherland against a common enemy.

Rare: Worldcat shows three printed copies in institutions outside Russia (Berlin State library, Princeton and Cornell), and it seems that the Library of Congress lost their example. Harvard and Chapell Hill own only the 1903 edition. No copy traced on the Western market in recent decades.

Avenir Nizoff (a pianist in the second half of the 20th century, living in Edmonton, Canada, who gathered a very large library of Russian works of all kinds, and often rebound his books himself, as it is probably the case with this pamphlet).

Publisher’s printed upper wrapper stained and creased, with crude marginal repairs and a closed tear along the cloth spine; closed tears in the gutter throughout, title with marginal, crude repair not affecting text and overlapping on the original paper, light trace of a small removed label, some light spotting and marginal waterstaining, pp. 11 – 14 loose.