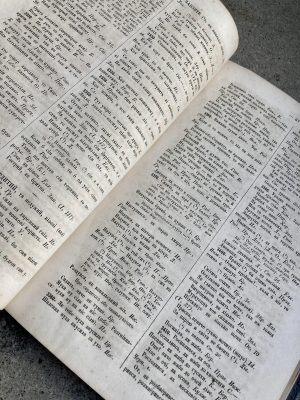 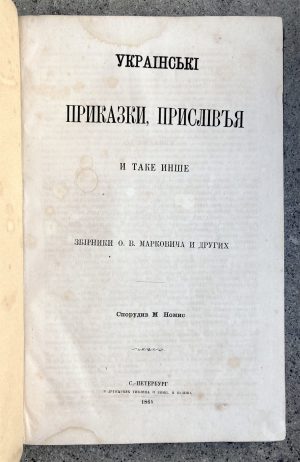 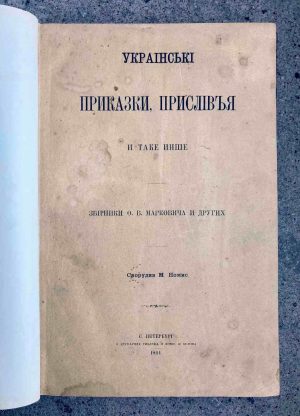 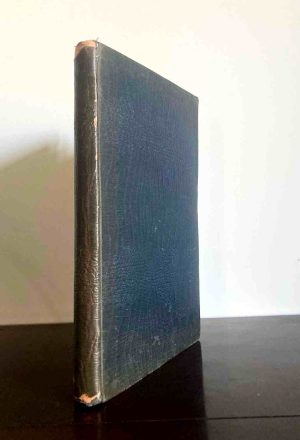 [Ukrainian Sayings, Proverbs and so on. Collected by O.V. Markovich and others].

First edition of what was considered the most important work of Slavic paroemiology of its time, and a survival of measures against the Ukrainian language. Rare on the market: we could not trace any copy at auction in recent decades.

Matviy Nomys, pseudonym of Matvii Symonov (1823 – 1900), was a Ukrainian author and ethnographer. He also worked as a government auditor, high school principal, and county supervisor. Throughout his entire life, Nomys methodically collected and classified examples of Ukrainian folklore, culminating in the publication of this work.

The collection contains some 14,339 proverbs and sayings and 505 riddles, including materials collected by Mykola Bilozersky, Vasyl Bilozersky, Panteleimon Kulish, Vasyl Lazarevsky, Opanas Markovych, Stepan Rudansky, and Marko Vovchok. Remarkably, several of the featured phrases highlighted a distressing, but quite common for the times, tendency of addressing Jews in a derogatory manner, including “zhide, zhide, svyne ukho” (Yid – Yid, pig’s ear).

In 1876, twelve years after the publication, Tsar Alexander II of Russia issued the Ems Ukaz, a secret decree banning the use of the Ukrainian language in print, with the exception of reprinting of old documents. The ukaz forbade the import of Ukrainian publications and the staging of plays or lectures in Ukrainian; books like Nomys’ were to be withdrawn from public libraries and their circulation limited as much as possible. The decree effectively remained in force almost 30 years, until 1905, when Tsar Nicholas II was forced to implement some liberal changes. Subsequently, the Soviet Union authorities considered Nomys a bourgeois and did not allow publication of his works either.

In 1985, to celebrate the 120-year jubilee of the publication these Ukrainian Sayings, a reprint edited and financed by Mstyslav Vladyka was issued in the USA. It was not until 1991, the year Ukraine became officially independent, that the Ukrainian periodical Kyiv started to publish extracts from Nomys’ famous work.

A bit worn overall, some staining, especially waterstaining, sometimes heavier towards the end.