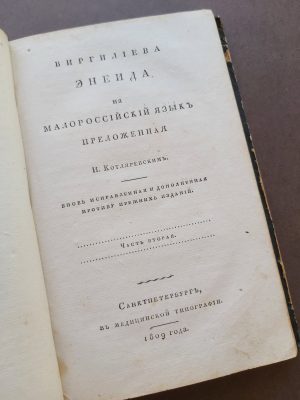 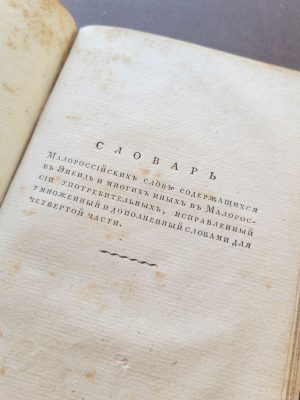 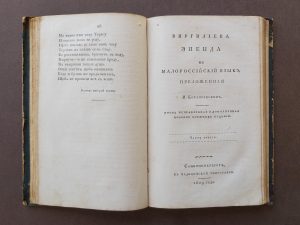 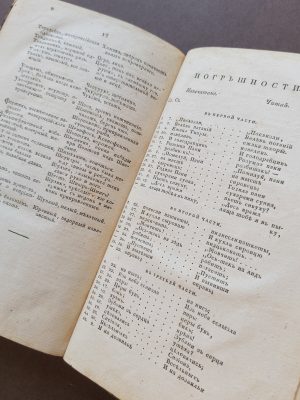 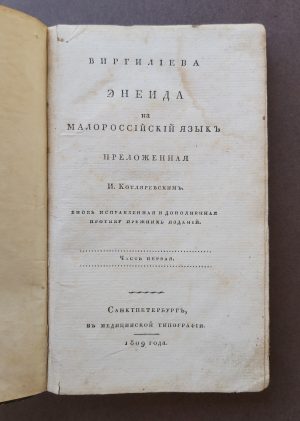 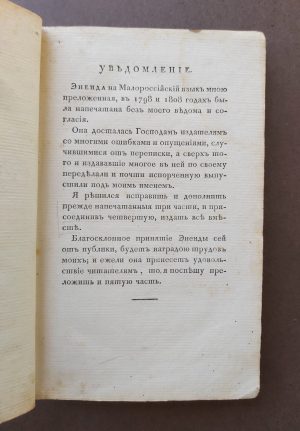 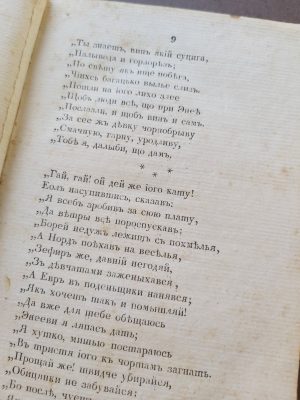 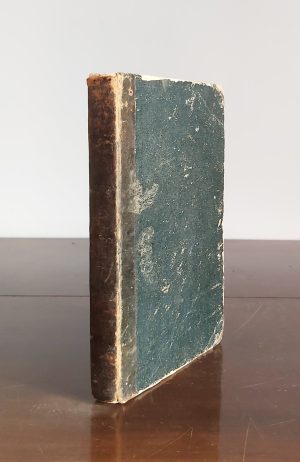 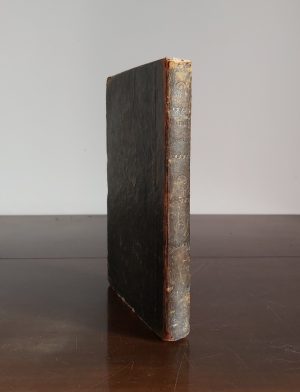 The birth of Ukrainian literature

[The Aeneid, translated into the Little Russian/Ukrainian].

KOTLIAREVSKII, Ivan Petrovich, Virgillieva Eneida, na malorossiiskii iazyk prelozhennaia,Meditsinskaia tip., Skt Peterburg , 1809.
The first literary work wholly written in modern Ukrainian: a important edition of the main book written by “the father of modern Ukrainian literature” (Encycl. Britannica). This is the first edition authorised by the author and the first to include 4 parts, with a dictionnary of more than 1000 Ukrainian words. A very rare book: only two copies in WorldCat and no copy traced outside Russia and Ukraine in recent decades. Read More

The first literary work wholly written in modern Ukrainian: a important edition of the main book written by “the father of modern Ukrainian literature” (Encycl. Britannica).

Very rare: only two paper copies in WorldCat: NYPL and Warsaw in Poland. No copy traced at auction outside Russia and Ukraine in recent decades. Absent from the Junius Spencer Morgan Collection of Virgil’s works in Princeton, where apparently the first Aeneid in Ukrainian is from 1890.

Rather than a translation, Virgilieva Eneida is actually a free adaptation of the Russian parody on the Aeneid written by Nikolai Osipov and published in 1791-96 as Virgil’s Aeneid turned inside out [Virgilieva Eneida, vyvorochennaia na iznanku]. Writing his own version shortly after, in 1798, Kotliarevskii (1769-1838) gave it a decidedly Ukrainian turn and transformed his work almost into a nationalist manifesto. Indeed, “the Eneida transmutes Aeneas and the Trojans into dispossessed Cossacks of the period after the suppression of the Zaporizhska Sich (Cossack territory) in 1775″ (Encycl. Brit.), joining by doing so many members of the Ukrainian elite nostalgic of the Cossack state liquidated by Catherine the Great. Within a wider perspective, the work takes a significant place in the wider formation of romanticism and nationalism in Europe.

Kotliarevskii also added an important linguistic aspect to his work, bringing “together valuable materials not only from the vernacular but also from various distinctive idioms; e.g., those of seminarians, wanderers, and thieves” (Encycl. Brit.). The author added indeed a “Dictionary of Little-Russian Words”, a glossary of more than 1000 Ukrainian words written in the phonetic spelling known as “yaryzhka”.

This 1809 edition is the first edition authorised by the author and the first to include 4 parts. The first three parts of the poem were published in 1798 in St. Petersburg, without Kotliarevskii’s knowledge, and reprinted in 1808. Kotliarevskii finally initiated his own publication in 1809, with the financial help of S.M. Kochubei; he made a number of changes to the previously published text and added a fourth part. The fifth and sixth parts were written much later, in the first half of the 1820s, and the first complete edition of Eneida appeared posthumously in 1842 in Kharkov.

Some foxing and staining throughout, sometimes heavier, first 3 leaves with corner waterstain, one leaf with a larger brown stain, three lower outer corners torn away just touching the text without loss of letters though, one closed tear in the text, some leaves tender and fragile, small marginal pinhole in upper gutter corner of most leaves; binding worn but solid, extremities more so and with minor losses, gilt oxidized. A complete, solid and unrestored example.