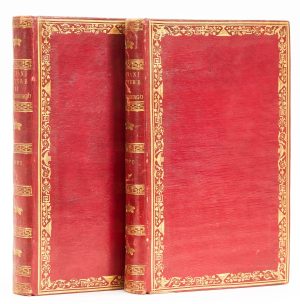 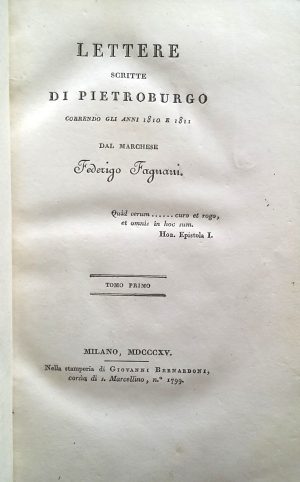 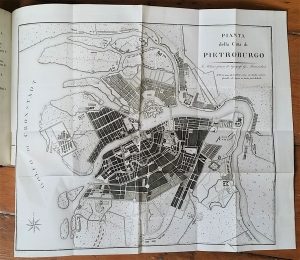 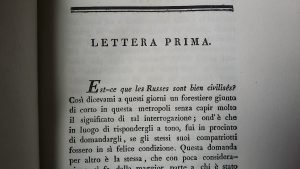 A beautiful example, very fresh and exempt of any foxing, of the expanded second edition, containing sixteen more letters in addition to the six published in the original edition of 1812. Scarce.

Written during his stay in Saint Petersburg, these letters of Count Fagnani (1775 – 1840) recounts his experience of the Russian capital on the eve of the Napoleonic invasion. Of special interest is Fagnani’s analysis of the social and political climate, as well as of the military potential of Russia compared with those of England and France. As a Councilor of State and Chamberlain of the King of Italy Fagnani was well versed in the European politics. It is, therefore, particularly curious that already at that time he was predicting a failure of the Napoleon’s ambitions of vast European expansion.

When on his return to Italy Fagnani decided to publish the “Letters from St. Petersburg”, many friends warned him against doing so. For instance, the prominent Italian politician Ferdinando Marescalchi (1754 – 1816) wrote him on the 4th March 1812: “My dear friend, […] please delay the publication of your work at least until it is clear whether the war will happen or not. If there is no war, think about the envy, about investigations into the circumstances of your trip [to Russia], and also about whether it is worth revealing the world the thoughts that the receiving party will not appreciate. If the war does take place than you may feel free to say whatever you want. In this case, the worse things you say the more satisfaction it will cause here”.

Despite these warnings, Fagnani went ahead with the publication of his book, which, once out, received a lot of attention in national and foreign press. Luckily for the author maybe, Napoleon’s ambitions were halted by the Russians, which led to the Emperor’s abdication from the thrones of France and Italy in 1814. In the circumstances of growing anti-French feelings in Italy, Fagnani published this expanded edition in 1815 – the year of Napoleon’s definitive downfall.

It is surprising that the Fagnani’s “Letters” were not translated into Russian at that time, even though it is known that the author sent a copy of his work through an intermediary to the Russian tsar in 1816. It is only in 2009 that a St. Petersburg publisher, “Liki Rossii”, in collaboration with the Italian Institute of Culture, published the work in a Russian translation by Irina Konstantinova.

From the estate of Professor JMA Lindon (professor of Italian Studies at University College of London; a recognized scholar of Italian literature, publishing widely on the life and works of Vittorio Alfieri and Ugo Foscolo, and on the history of Dante studies).

Two 8vo volumes, with the errata l., an engraved folding plan and 8 plates by G. Bernardoni.

Contemporary red straight-grain morocco, gilt, spine in compartments, some with a butterfly tool.